Originally published in the Times (UK) on Saturday, February 13th, 2010 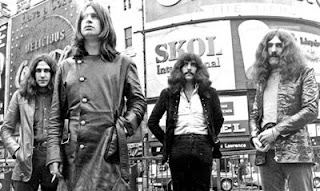 It began with a clap of thunder and a tolling bell. Then, as a heavily distorted guitar played a diminished fifth — a tone sequence once banned by the Roman Catholic Church for being the “Devil’s interval” — a male voice started to wail as if from the grave. A few bars later the drums came in, and the resulting din was loud enough to make it seem as if Earth was coming apart at the seams.

The date was February 13, 1970 — 40 years ago today — and the album Black Sabbath, by the band of the same name, had just been released. It gave birth not only to heavy metal, but also to a new kind of dance move for the working-class male: headbanging.

Four men were responsible: Ozzy Osbourne, Tony Iommi, Terence “Geezer” Butler and Bill Ward. All had grown up amid the postwar “bomb building sites” of Aston, Birmingham, and left school with virtually no qualifications. Before forming Black Sabbath and recording their eponymous LP — by no accident, the release date was Friday the 13th — Osbourne had worked at the Digbeth slaughterhouse, where he killed up to 200 cows a day, while Iommi, now considered one of the great rock guitarists of all time, had been a welder, losing two of his fingertips in an accident with a sheet metal press. To get around his disability, he made prosthetics using an old Fairy Liquid bottle.

“To be honest with you, the only reason we ever played music was to get out of our s*** day jobs,” said Osbourne, now 61, in an exclusive interview with The Times to mark the anniversary of his former band’s now venerated album.

He was later fired by the band and went on to become a successful solo artist and a pioneer of reality television. Osbourne and Iommi have since been involved in litigation over who owns the name Black Sabbath, with Osbourne saying that he wants it to be split four ways equally.

“We had no idea what we were doing,” he said. “When we made that first album, for example, we had a manager up in Birmingham, Jim Simpson, and all he said was: ‘When you’re on your way to your next gig in Switzerland, why don’t you stop off at this studio in Soho and put some of your songs on tape?’

“It was a tiny, poky little place, I remember, and it was the first time we’d ever been recorded. We got the whole thing done in 12 hours. If you ask me what I think 40 years later, all I can say is, I wish I could make a record that quickly now.”

As for the origins of Black Sabbath’s signature dance move — a frenzied bobbing of the head, the drama enhanced by having long, unkempt hair — Osbourne is reluctant to claim sole credit. “I used to head-bang on stage, but I honestly don’t know if it was me who started it, or whether it was just the thing to do,” he said.

“It got out of control, to the point where people would be headbanging with their heads inside the speaker cabinets. I mean, people were getting f***ing brain haemorrhages. One bloke died, I think.”

As might be expected of four men whose consumption of alcohol and mind-altering substances went on to become part of rock folklore, accounts vary of how their music morphed from the standard heavy blues of the late 1960s, as practised by the likes of Cream, Jimi Hendrix and the Kinks, into the material of their first album, which spawned a genre that has lasted to this day. One turning point, according to the band, was when a 1963 Boris Karloff film played at the cinema opposite their rehearsal room. Its title? Black Sabbath.

“It’s true that we were influenced by watching horror movies,” Bill Ward, the band’s drummer, told The Times. Although it started out as a gimmick, he said, “it matured into something that was almost waiting to arrive. Although a lot of established bands were playing loud rock then, what Sabbath did made it very different.” Critics were sceptical.

In Rolling Stone, the rock journalist Lester Bangs gave Black Sabbath’s debut two and a half stars out of five, panning the band as “unskilled labourers… hyped as a rockin’ ritual celebration of the Satanic Mass or some such claptrap. The album is a schuck”.

Osbourne wasn’t put off; his severe dyslexia meant that he never read reviews. Fans such as Graham Wright, now 59, from Stockton-on-Tees, who later became a roadie for the band, attributed the bad press to elitism. “These snobby middle-class journalists were looking down their noses.”

The public bought the Black Sabbath album regardless, with sales reaching a million by the end of the year. The band saw very little financial reward for it, having previously signed away all their rights “in perpetuity”.

The band were particularly successful in America, although some fans there were disappointed they didn’t take the black magic theme seriously. When Osbourne was confronted with Satanists holding a seance outside his hotel room, he blew out their candles and sang Happy Birthday. In another, more serious incident, a man in a black robe jumped on stage and lunged at Iommi with a dagger. A roadie intervened.

It wasn’t until the mid-1970s that the term heavy metal emerged for the music that Black Sabbath had created, although the band had no affection for it. “We said, ‘This ain’t heavy metal, we’re a hard rock band’,” said Ward, who lives in Orange County, California. Osbourne and Butler live in Los Angeles, Iommi in Birmingham.

“To some extent we still consider ourselves a hard-rock band,” said Ward. “But that first album, when our lyrics changed, that is heavy metal. Was it the first heavy metal album, in every sense of the word? Yes it was. It was the beginning of a new era.”

Chris Ayres is the co-author, with Ozzy Osbourne, of the international bestseller I Am Ozzy (Sphere, £20)